Honey Crisp, Sweet Tango, Snow Sweet and Zestar are only a few most sought after apple trees recently developed.  The crisp, sweet, flesh and crowd pleasing names command great prices at the orchard and market.  In many orchards, the old standard varieties are topworked or pulled out and replaced with these popular varieties.  However, through this process many old and unique varieties of apples may be lost for ever.

Apples of the past harbored a multitude of colors, textures, shapes, growth habits and most importantly, taste that solidified their place in the homestead orchard. Wether it be the bright pink flesh of the Cinnamon Spice, the enormous size of the Pound Sweet or the unattractive brown russeted skin of the Golden Russet, each variety of the past had a unique feature that made for a unique use.  Looking through many apple catalogs one can find a section highlighting the use of the apple.  The uses range from good for fresh eating to sauce, cider, or long-term storage.

As the requirements of apples changed over the years due to improvements in transportation, storage and disease resistance, so did the varieties grown by orchards.  Perhaps the greatest change in the apple was the shift from a society of people who relied on apples as a preserved food source in the winter to one where many apples are eaten fresh.  However, if one looks back on the parentage of these current varieties they will often find the unfamiliar name of an old Antique Apple.

Over 17,000 varieties of apples have been recorded, but only a few thousand are documented to still be in existence today.  Fewer than a handful are commonly available to consumers.  Many of the lost varieties were probably no big loss as they lacked the qualities of improvement over other varieties.  But many of the rare apples quite possibly are worth saving.  These varieties could be used in breeding programs or have a unique property that a certain segment of the marketplace demands.  Once a particular genetic variety is lost, it is very difficult, to resurrect it.  Herein lies the need for genetic preservation.

Seed Savers Exchange is an organization committed to genetic preservation of rare and old varieties of fruits, vegetables, and flowers.  Each spring they offer an Apple Grafting Workshop.  At the workshop, participants have the opportunity to learn how to bench graft apple varieties taken from there preservation orchard.  If successful, they then get to take their trees home and enjoy these apples in a few years, alright more like 5 to 7 years.  Two years ago I attended this workshop and became hooked when 3 of my 4 grafted trees actually took.  A couple were damaged over the winter but I still have 1 tree that is flourishing, a variety named Hamilton.

Each year since that first class, I have spent a few nights in the late winter, grafting new varieties of apples.  The grafting process is quite simple.  One needs a few supplies such as a sharp grafting knife, rubber band, parafilm or grafting wax, a rootstock and some scionwood.  The rootstock is the bottom portion of the soon to be apple tree.  The rootstock has many functions.  It is responsible for providing the anchor of the tree.  It also can provide some disease resistance or help the tree tolerate different soil and temperature conditions.  Most commonly, the rootstock is used to dictate the size of the apple tree when mature.  Most commercially available trees are grafted onto a semi dwarfing root stock.  I purchased my rootstocks from Fedco Trees and Willamette Nurseries.  Fedco sells them in increments of 20 while Willamette sells them by the 100.    Common 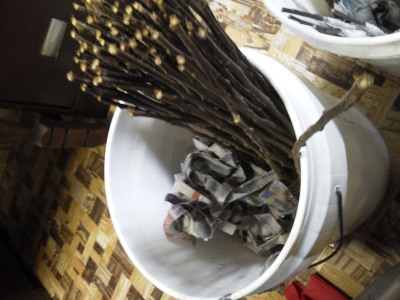 varieties are the Malling 7, Malling 111, and Bud 118.  These rootstocks restrict the size of the tree between 50% and 80% of the standard size. Many commercial orchards use dwarfing rootstock.  This allows for easy picking, spraying, pruning and trees can be planted more densely.  I have been using semidwarfing and standard rootstocks.  Some nurseries, like St. Lawrence Nursery, only use standard rootstocks as they believe it also increases winter hardiness and longevity to the tree. Standard rootstocks do take longer to reach production and the large trees can be inconvenient to work with.  But not much is as stately as a big old 30 ‘ apple tree. 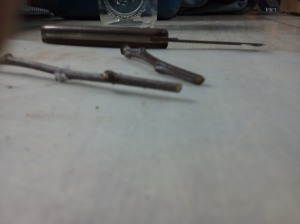 The most important part of the apple tree graft is the scion.  The scionwood is the specific variety of apple being grafted.  It has unique fruiting qualities that make it desirable. While searching for old apple varieties of apples I stumbled across Eastmans Antique Apples.  It is an amazing place claiming to have over 1500 varieties of apples.  They don’t typically sell trees or scionwood as they focus on growing and selling the actual apples, which I think is wonderful.  I was able to obtain 20 varieties of scionwood from them.  This year I grafted over 150 apple trees encompassing 30 named varieties and 6 unknown varieties collected from a neighboring abandoned farm.

There are multiple grafting techniques.  The technique used depends on when the grafting is taking place and the size of the rootstock and scionwood.  I typically use a whip and tongue grafting method.  The grafting process begins by cutting the rootstock and the scion at a slant. The areas of the slants need to be similar in size and shape so the cambium layers of the two line up.  The cambium layer is the thin ring just beneath the bark and is a pale green or cream color.  This tissue is actively growing that will provide the initial vascular connection from the rootstock to the scion.  A cut is then made vertically into each of the pieces that make the tongue.  The tongue will help firmly hold the scionwood to the rootstock untill the two grow tougher with the help of callus tissue.  Callus tissue is a mass of undifferentiated tissue.  While to some it would resemble scar tissue, it is more like a mass of stem cells.

Callus tissue has the ability to develop into roots, shoots, or other tissue.  In a graft, the callus turns into new vascular tissue that grows the scionwood and rootstock together.  The newly formed graft is then wrapped with a rubber band for stability and grafting wax or parafilm (I use press and seal) to keep in the moisture.  The roots of the hopeful trees are then wrapped in wet newspaper or sawdust.  The trees should be placed in a cool and damp location.  I have used a refrigerator but the root cellar works better. It is important that the trees are not bumped or disturbed during their time of healing together.  During the 4 to 5 weeks the two fuse together and the

buds will begin to develop.  When the buds begin to form the trees can be planted out in a convenient location were you can keep you eye on them  and water them frequently.  During the first year, never handle the trees by the scion as the connection can be easily broken.  During summer the parafilm and rubber band can be removed and it will become apparent which grafts worked.  The following spring, before bud break, the trees should be moved to their permanent location.

Some of the trees I have grafted are pretty obscure and may not be the greatest tasting for my area.  But my hope is that a few turn out to be something wonderful that others can enjoy. If there are others in the area who have scionwood they would like to trade, I would love to expand my collection of antique apples.